I’m just finishing with PyConUK, it has been a fun 3 days (and the sprints carry on tomorrow). 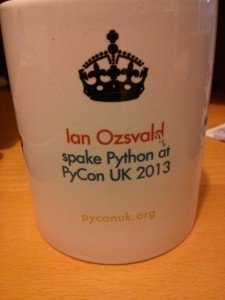 Yesterday I presented a lightly tweaked version of my Brand Disambiguation with scikit-learn talk on natural language processing for social media processing. I had 65 people in the room (cripes!), 2/3 had used ML or NLP for their own projects though only a handful of the participants had used either ‘in anger’ for commercial work. The slides below are slightly updated from my DataScienceLondon talk earlier in the year, there’s more on this blog over the last 2 months that I hadn’t integrated into the talk.

The project is in github if you’re interested, I’m looking for new collaborators and I can share the dataset of hand-tagged tweets.

I’d like to see more scientific talks at PyConUK, a lightning talk for later today will introduce EuroSciPy 2014 which will take place in Cambridge. I’d love to see more Pythonistas talking about scientific work, numerical computing and parallel computing (rather than quite so much web and db development). I also met David Miller who spoke on censorship (giving a call-out to the OpenRightsGroup – you too should pay them a tenner a month to support digital freedoms in the UK), but looked over a long period of censorship in the UK and the English language. As ever, there were a ton of interesting folk to meet.

David mentioned the Andrews and Arnold ISP who pledge not to censor their broadband, apparently the only ISP in the UK to put up a strong pledge. This is interesting.

Shortly in London I’ll organise (or co-opt) some sort of Natural Language Processing meetup, I’m keen to meet others (Pythonistas, R, Matlab, whoever) who are involved in the field. I’ll announce it here when I’ve figured something out.