Last night we ran our first PyDataLondon meetup (@PyDataLondon). We had 80 data-focused Pythonistas in the room, co-organiser Emlyn lead the talks followed by a great set of Lightning Talks. Pivotal provided a cool venue (thanks Ian Huston!) with lovely pizza and beer in central Shoreditch – we’re much obliged to you. This was a grand first event and we look forward to running the next set this summer. Our ModelInsight got to sponsor the beers for everyone after, it was lovely to see everyone in the pub – helping to bind our young community is one of our goals for this summer.

Emlyn opened with a discussion on “MATLAB and Python for Life Sciences” covering syntax similarities, ways to port MATLAB libraries to Python and hardware interfacing: 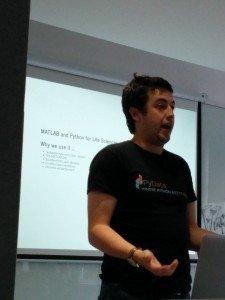 After the break we had a wide range of lightning talks:

Here’s Jacqui talking on Viz using Python and D3 and introducing her part in the new Data Journalism book: 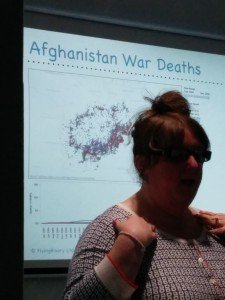 During the night I asked some questions of the audience. We had a room of mostly active Python users (mainly beginner or intermediate), the majority worked with data science on a weekly basis, almost all using Python 2 (not 3). 6 used R, 2 used MATLAB and 1 used Julia (and I’m still hoping to learn about Julia). A part of the reason for the question is that I’m interested in learning who needs what in our new community, I’m planning on re-running my 2 day High Performance Python tutorial in London in a couple of months and we aim to run an introduction to data science using Python too (mail me if you want to know more).

We’re looking for talk proposals for next month and the month after along with lightning talk proposals – either mail me or post via the meetup group (but do it quick).

I totally failed to remind everyone about the upcoming PyDataBerlin conference in Berlin in July, it runs inside EuroPython at the same venue (so come and stay all week, a bunch of us are!). I also forgot to announce EuroSciPy which runs here in Cambridge in August, you should definitely come to that too, I believe I’m teaching more High Performance Python.

The next event will be held on July 1st at the same location, keep an eye on the meetup group for details. I’m hoping next time to maybe put forward a Lightning Talk around my High Performance Python book as hopefully it’ll be mostly finished by then.

Thanks to my co-organisers Emlyn and Cecilia (and Florian – get well soon)!

Ian is a Chief Interim Data Scientist via his Mor Consulting. Sign-up for Data Science tutorials in London and to hear about his data science thoughts and jobs. He lives in London, is walked by his high energy Springer Spaniel and is a consumer of fine coffees.
Previous New High Performance Python chapters online & teaching a 2 day course on HPC
Next 7 chapters of “High Performance Python” now live