The last month has been crazy busy, not least because I got to run my first High Performance Python 2 day tutorial at a university. I was out in Aalborg University teaching a PhD group, we covered four blocks:

UPDATE As of October 2014 I’ll be teaching High Performance Python and Data Science in London, sign-up here to join our announce list (no spam, just occasional updates about our courses).

Here’s a picture of my class, it all went rather swimmingly. I plan to run the same class in London in the coming months (details to follow): 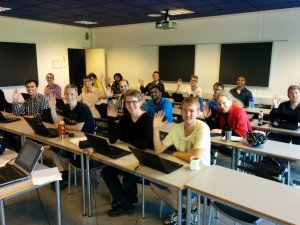 On the same note we pushed some more chapters for our High Performance Python book on to O’Reilly’s build system a week back, we now have:

More chapters will go live in a couple of weeks, we’re in the final editing phase now.

Don’t forget that PyDataBerlin is coming up in a couple of months, it runs during EuroPython. If you’re out for EuroPython then it makes a lot of sense to go to PyDataBerlin too 🙂

Ian is a Chief Interim Data Scientist via his Mor Consulting. Sign-up for Data Science tutorials in London and to hear about his data science thoughts and jobs. He lives in London, is walked by his high energy Springer Spaniel and is a consumer of fine coffees.
Previous PyDataLondon Meetup Number 1 (June – JS, NLP, Kinects)
Next First PyDataLondon meetup done, preparing the second