The conference is over, tomorrow I’m sticking around to Sprint on scikit-learn. As last year it has been a lot of fun to catch up with colleagues out here in Brussels. Here’s Logilab’s write-up.

Yesterday I spoke on Building an Open Source Data Science company. Topics included how companies benefit from open sourcing their tools, how individuals benefit by contributing to open source and how to build a consultancy or products.

This led to good questions over lunch. It seems that many people are evaluating whether their future is as predictable as it once was, especially for some in academia.

One question that repeatedly surfaced was “I’m an academic scientist – how do I figure out if my skills are needed in industry?”. My suggestion was simply to phone some nearby recruiters and have an introductory chat (probably via a Google search). Stay in control of the conversation, start from the position that you’re considering a move into industry (so you commit to nothing), build a relationship with the recruiter if you like them via several phone calls (and weed out the idiots – stay in control and just politely get rid of the ones who waste your time). 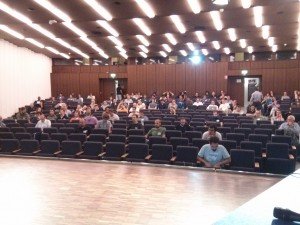 Almost certainly your science skills will translate into industrial problems (so you won’t have to retrain as a web programmer – a fear expressed by several). One recruitment group I’ve been talking with are the Hydrogen Group, they have contracts for data science throughout Europe. Contact Nick there and mention my name. If you’re in London then talk to Thayer of TeamPrime or look at TechCityJobs and filter by sensible searches.

Another approach is to use a local jobs board (e.g. in London there is TechCityJobs) which lists a healthy set of data science jobs. You can also augment your LinkedIn profile (here’s mine) with the term “data science” as it seems to be the term recruiters know to use to find you. Write a bullet-point list of your skills for data and the tools you use (e.g. Python, R, SPSS, gnuplot, mongodb, Amazon EC2 etc) to held with keyword searches and see who comes to find you (it’ll take months to get a good feel of what people are searching for to find you). In LinkedIn add any talks, open source projects etc that you contribute to as these are easy for someone to check to verify your skill level.

(Sidenote – I’m in the Sprint publishing this, I’ve just had a very interesting chat with a nascent company about how much they want to open source and the benefits and trade offs of doing so in their optics industry. Knowing why you attract user-attention, what you might give away to competitors, how much time you might lose in supporting non-commercial users whilst demonstrating your competence through open source is critical to making a reasoned decision. Related to this chat – posts on switching from [L]GPL to BSD 1, 2)

Next on the Friday I was invited to join a panel discussion asking “How do we make more programmers?”. It was nice to discuss some lessons learned teaching millions of beginners through ShowMeDo and by teaching at the intermediate/expert level at Python conferences. Thoughts covered the uses of the IPython Notebook, the depth of tuition to fit the needs of a group and the wealth of teaching material that’s freely available (e.g. pyvideo.org and the pytutor list). 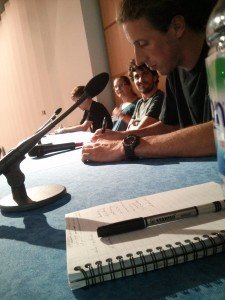 This morning Peter Wang gave the keynote looking at a future for data analysis with Python. The Continuum tool chain is looking very nice, Bokeh and Blaze look to be worth testing now. I’m still curious about the limitations of Numba, I suspect that common use cases are still a way from being covered.

During the conference I got to learn about cartopy (a bit of a pain to setup but they promise that process will improve) which is a very compelling replacement for basemap, vispy is a cool looking OpenGL based visualiser for large datasets and I learned how to install the IPython Notebook in one go using ‘pip install ipython[notebook]’.

Overall I’ve had fun again and am very grateful to be part of such a smart and welcoming community.