Minesh B. Amin (MBASciences) and I (Mor Consulting Ltd) taught Applied Parallel Computing over 3 hours at PyCon 2013. PyCon this year was a heck of a lot of fun, I did the fun run (mentioned below), received one of the free 2500 RaspberryPis that were given away, met an awful lot of interesting people and ran two birds-of-a-feather sessions (parallel computing for our tutorial, another on natural language processing).

I held posting this entry until the video was ready (it came out yesterday). All the code and slides are in the github repo. Currently (but not indefinitely) there’s a VirtualBox image with everything (Redis, Disco etc) pre-installed.

After the conference, partly as a result of the BoF NLP session I created a Twitter graph “Concept Map” based on #pycon tweets, then another for #pydata. They neatly summarise many of the topics of conversation.

Here’s our room of 60+ students, slides and video are below: 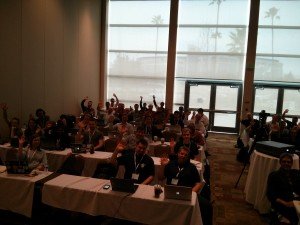 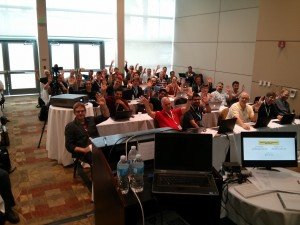 These are each of the slide decks:

I also had fun in the 5k fun run (coming around 77th of 150 runners), we raised $7k or so for cancer research and the John Hunter Memorial Fund.