Yesterday I spoke on The High Performance Python Landscape at PyDataLondon 2014 (our first PyData outside of the USA – see my write-up). I was blessed with a full room and interesting questions. With Micha I’m authoring a High Performance Python book with O’Reilly (email list for early access) and I took the topics from a few of our chapters. 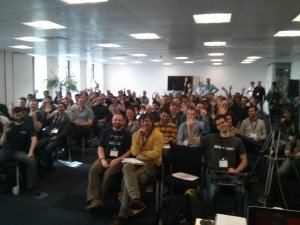 Slides from the talk:

UPDATE Armin and Maciej came back today with some extra answers about the PyPy-numpy performance (here and here), the bottom line is that they (Maciej says it is now fixed – quick service!). Maciej also notes improvements planned using e.g. vectorisation in numpy.

Ian is a Chief Interim Data Scientist via his Mor Consulting. Sign-up for Data Science tutorials in London and to hear about his data science thoughts and jobs. He lives in London, is walked by his high energy Springer Spaniel and is a consumer of fine coffees.
Previous PyData London Abstracts Announced
Next PyDataLondon 2014 Write-up