On Saturday six of us attended the Future Cities Hackathon organised by Carlos and DataScienceLondon (@ds_ldn). I counted about 100 people in the audience (see lots of photos, original meetup thread), from asking around there seemed to be a very diverse skill set (Python and R as expected, lots of Java/C, Excel and other tools). There were several newly-released data sets to choose from. We spoke with Len Anderson of SocITM who works with Local Government, he suggested that the parking datasets for Westminster Ward might be interesting as results with an economic outcome might actually do something useful for Government Policy. This seemed like a sensible reason to tackle the data. Other data sets included flow-of-people and ASBO/dog-mess/graffiti recordings.

Overall we won ‘honourable mention’ for proposing the idea that the data supported a method of changing parking behaviour whilst introducing the idea of a dynamic pricing model so that parking spaces might be better utilised and used to generate increased revenue for the council. I suspect that there are more opportunities for improving the efficiency of static systems as the government opens more data here in the UK.

Sidenote – previously I’ve thought about the replacement of delivery drivers with self-driving cars and other outcomes of self-driving vehicles, the efficiencies discussed here connect with those ideas.

With the parking datasets we have over 4 million lines of cashless parking-meter payments for 2012-13 in Westminster to analyse, tagged with duration (you buy a ticket at a certain time for fixed periods of time like 30 minutes, 2 hours etc) and a latitude/longitude for location. We also had a smaller dataset with parking offence tickets (with date/time and location – but only street name, not latitude/longitude) and a third set with readings from the small number of parking sensors in Westminster.

Ultimately we produced a geographic plot of over 1000 parking bays, coloured by average percentage occupancy in Westminster. The motivation was to show that some bays are well used (i.e. often have a car parked in them) whilst other areas are under-utilised and could take a higher load (darker means better utilised): 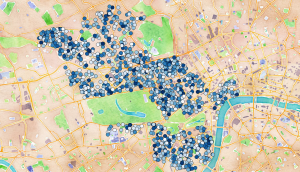 At first we thought we’d identified a striking result. After a few more minutes hacking (around 9.30pm on the Saturday) we pulled out the variance in pricing per bay and noted that this was actually quite varied and confusing, so a visitor to the area would have a hard time figuring out which bays were likely to be both under-utilised and cheap (darker means more expensive): 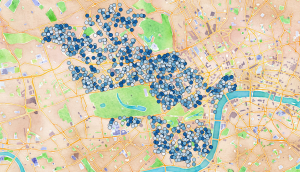 If we’d have had more time we’d have checked to see which bays were likely to be under-utilised and cheap and ranked the best bays in various areas. One can imagine turning this into a smartphone app to help visitors and locals find available parking.

Behind this model we captured the minute-by-minute stream of ticket purchases by lat/lng to model the occupancy of bays, the data also records the number of bays that can be maximally used (but the payment machines don’t know how many are in use – we had to model this). Using Pandas we modelled usage over time (+1 for each ticket purchase and -1 for each expiry), the red line shows the maximum number of bays that are available, the sections over the line suggest that people aren’t parking for their full allocation (e.g. you might buy an hour’s ticket but only stay for 20 minutes, then someone else buys a ticket and uses the same bay): 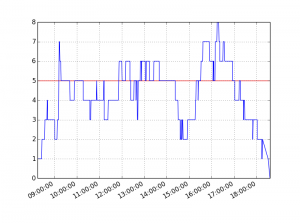 We extended the above model for one Tuesday over all the 1000+ plus parking bays in Westminster.

Additionally this analysis by shows the times and days when parking tickets are most likely to be issued. The 1am and 3am results were odd, Sunday (day 6) is clearly the quietest, weekdays at 9am are obviously the worst:

We believe that the carrot and stick approach to parking management (showing where to park – and noting that you’ll likely get fined if you don’t do it properly) should increase the correct utilisation of parking bays in Westminster which would help to reduce congestion and decrease driver-frustration, whilst increasing income for the local council.

Update – at least one parking area in New Zealand are experimenting with truly dynamic demand-based pricing.

We also believe the data could be used by Traffic Wardens to better patrol the high-risk areas to deter poor parking (e.g. double-parking) which can be a traffic hazard (e.g. by obstructing a road for larger vehicles like Fire Engines). The static dataset we used could certainly be processed for use in a smartphone app for easy use, and updated as new data sets are released.

Our code is available in this github repo: ParkingWestminster.

Some reflections for future hackathons:

Update – Stephan Hügel has a nice article on various Python tools for making maps of London wards, his notes are far more in-depth than the approach we took here.

Update – nice picture of London house prices by postcode, this isn’t strictly related to the above but it is close enough. Visualising the workings of the city feels rather powerful. I wonder how the house prices track availability of public transport and local amenities?

Ian is a Chief Interim Data Scientist via his Mor Consulting. Sign-up for Data Science tutorials in London and to hear about his data science thoughts and jobs. He lives in London, is walked by his high energy Springer Spaniel and is a consumer of fine coffees.
Previous Public Python survey for “High Performance Python” book – your input much appreciated!
Next What confusion leads from self driving vehicles and their talking to each other?