Overfitting with a Decision Tree

Below is a plot of Training versus Testing errors using a Precision metric (actually 1.0-precision, so lower is better) that shows how easy it is to over-fit a decision tree to the detriment of generalisation. It is important to check that a classifier isn’t overfitting to the training data such that it is just learning the training set, rather than generalising to the true patterns that make up the entire dataset. It will only be a good a good predictor on unseen data if it has generalised to the true patterns. 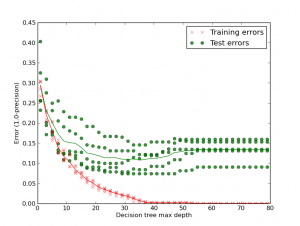 Looking at the first column (depth 1 decision tree) the training error (red) is around 0.29 (so the Precision is around 71%). If we look at the exported depth 1 decision tree (1 page pdf) we see that it picks out 1 feature (“http”) as the most informative feature to split the dataset (ignore the threshold, that’s held at a constant 0.5 as we only have 0 or 1 values in our training matrix). It has 935 samples in the dataset with 465 in class 0 (not-a-brand) and 470 in class 1 (is-the-brand).