Ohhh, photos. The first shot was taken out of my back window, it was taken using the camera’s fully automatic mode. It is very dark – I had the flash turned off (not that it would have helped that much) as I was behind a pane of glass. 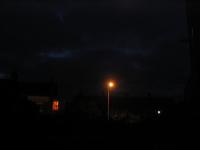 The second was taken with a 15 second exposure time (with the camera held in the corner of the window to reduce shake). The sky looks much bluer, and the street light has an eeire glow. 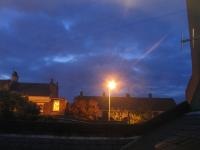 I’ve written a page on Addings Images to WordPress which summarises how to get the plugin working.